Teaching cooking and baking in France. 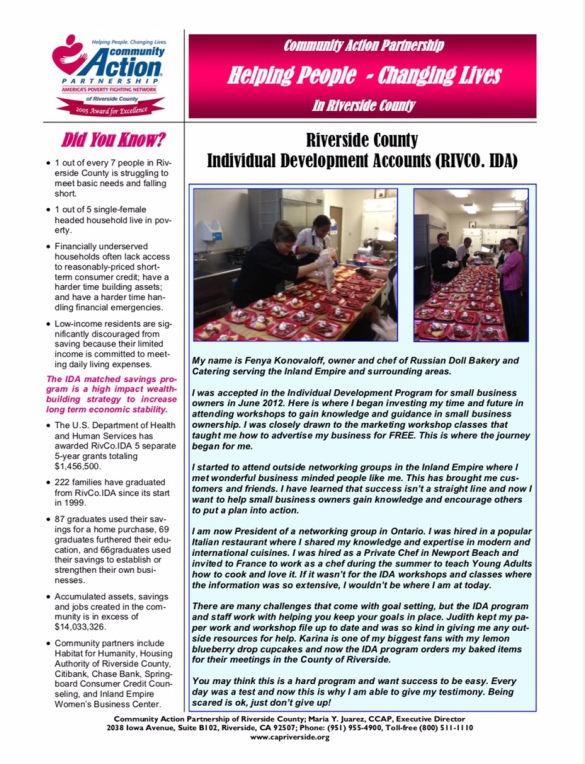 Chef Fenya started her business two years ago after a career change from the corporate world. Going on the limb after suffering minor hardships while looking for employment, Chef Fenya decided she wanted a career. Most of her friends suggested starting her own business adding that, “she makes the best pastries and her food was always fancy, so why not do what she loves”? The support was a foreshadowing of her business becoming identified as a flourishing business.  Fenya started Russian Doll Bakery and saw it evolve into a catering business in response to the demand in her area. While Chef Fenya continued to look for guidance on how to make her business a success, she stopped local networking while focusing on her clients and started to look at herself-taking advantage of her skills focusing on what made her business different from others. Chef Fenya gets her best ingredients from local farmers markets. This aspect about her dedication to getting the best ingredients separates her from other catering businesses in Riverside. She allows her clientele and food to evolve together. What makes Fenya’s business so exciting is that it is new and ever changing.  Her ability to make an online presence through social media further credits her conquest to provide the public with original and tasty foods. By being discovered at a private dinner party in Newport Beach, Chef Fenya’s doors started opening for her to travel internationally to learn new cultures of food and enjoy what she loves to do. She took the path destiny had paved for her as well as finding her natural gift to make amazing presentations. Her long-term goal is to open an international catering center to host events with traveling chefs and train young adults cooking and baking to grow their confidence with food. Finally, she found her local second kitchen through perfect timing, which has given her the complete control of a catering kitchen in Riverside and has found a home for her business to grow. Now her passion lies with the joy in her interactions with clients.

Fenya Konovaloff was honored with the Rising Star Award at the Eagle Glen Golf Club in Corona, CA. This was an exciting date for our chef, receiving six official awards since she began Russian Doll Bakery and Catering in 2012.

The Rising Star Award is a corporate recognition that nominates business owners under the Chapter of the National Association of Women Business Owners’.

Upon receiving The California State Senate Recognition, The City Council Recognition, The California State Senate Recognition, and Californian Legislature Assembly Recognition, Chef Fenya is recognized as The National Rising Star award winner of the Inland Empire in 2014. In honor of being selected by the Inland Empire’s Chapter of the National Association of Women Business Owners’ (NAWBO), she was announced the “Amazing Women” for her accomplishments over the past 2 years and was quoted to specialize in “everything”. Mike Morrell, State Senator of California, said “Fenya’s quick rise to prominence as a gourmet chef is something that all young women can look to as an example for their own career goals”. The California State Senate also presented Fenya with the similar recognition as she received additional recognition for the NAWBO award from Gloria Negrete McLeod, a member of Congress in California and said, “Your unwavering adherence to your high catering business merits the esteem of the community”. Fenya Konovaloff's ability to run a business brings professional service and close relationships with clients. This summer, Chef Fenya is eager to capitalize on her glorious road to success as a business owner in the Inland Empire by “bringing family and farms together through food”.